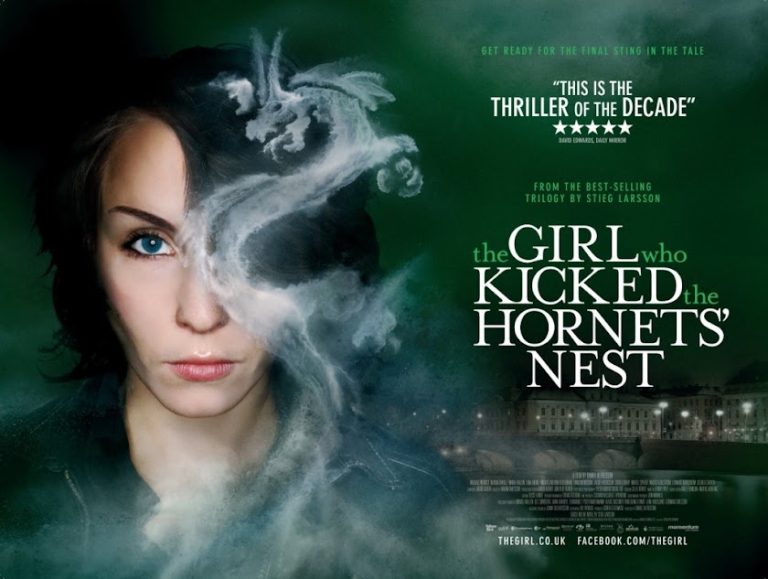 Depravity has finally found its bounds in the film trilogy concluding with The Girl Who Kicked the Hornet’s Nest. The series shone light on a world that hates women. Sexual violence manifest in the paternalistic world of Nazis, Socialists, and Capitalists was made blatantly obvious in the first part of the trilogy, The Girl With the Dragon Tattoo, and extrapolated upon in the second, The Girl Who Played with Fire. The first two films spared little graphic detail in painting the horrific scenes of the story. In the final film, the revelations and depictions slow as the trilogy brings closure to a fictional story the world wishes didn’t ring so true.

The reduction in graphic images is a welcome respite for The Girl Who Kicked the Hornet’s Nest. The sexual abuse and brutal violence inflicted upon Lisbeth Salander in the first two movies is more than what just about anyone could endure. Presenting the depictions for an audience also has a limit, as Director Daniel Alfredson clearly understands. He shows a great deal of restraint not dwelling on the relived rape scene from The Girl With the Dragon Tattoo, having a judge announce they had seen enough. Without the shock value, a great deal of time was left available for wrapping up the story, explaining what had happened. Unfortunately the explanations never come. Watch it over at 123Movies.

After the first two film installments laid bare the deficiencies of society, The Girl Who Kicked the Hornet’s Nest lets society off the hook. The last chapter no longer holds a mirror to the institutions the world has come to understand and trust. Rather, a shadowy institution emerges as the driving force behind all that has transpired in the stories. Where it came from and why it was authorized is never realized, just explained away as a force designed to protect society. It is an incredibly unsatisfactory explanation. It feels as though Stieg Larsson, in writing his Millennium Trilogy, dug a hole to the heart of societal evil but then couldn’t describe what he found. The film wraps Lisbeth’s saga but leaves it open as to why she even had to face the ordeal.

As with The Girl Who Played with Fire, The Girl Who Kicked the Hornet’s Nest suffers from comparisons to The Girl With the Dragon Tattoo. The first part of the trilogy was such a brilliantly realized shock to the system; the subsequent sequels have understandably paled in comparison. Taken in its own light, The Girl Who Kicked the Hornet’s Nest is a very good movie. With the exception of its two predecessors, it is better than just about every thriller in recent memory. Noomi Rapace as Lisbeth Salander is a captivating anti-hero who owns every scene she is in. In the rest of the scenes, Michael Nyqvist’s Mikael Blomkvist guides the story with a weary determination needed to achieve justice. The characters are fully realized and brought to life by actors at the top of their game.

With the performances, and perfect thriller pacing, it is strange to feel let down by this movie. But The Girl With the Dragon Tattoo encumbered it with expectations probably impossible to fulfill. In that light, The Girl Who Kicked the Hornet’s Nest ably fills a role. It concludes a story anybody who saw the first two films will need to see. It is just a shame it couldn’t conclude with a societal kick to the gut it was set up to deliver by kicks, gun-shots, and sexual violations suffered by the trilogy’s unforgettable heroine.